It's nighttime in the year 1921. A young man from Zurich, Switzerland is aboard the S.S. Berengaria. 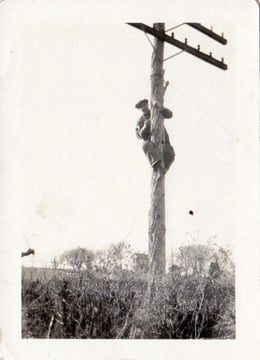 For a moment this young immigrant steps out into the chilly Atlantic air with thousands of bright stars surrounding the night sky. He looks out beyond the bow of the ship and into the unknown.

His name is William Wachter, and a journey awaits him in America.

William had relatives — two uncles and a sister — in a place called Kansas City. His current mission was to make it to his destination, but that came with challenges on its own. William did not speak English, he only had $150 from his life savings, and still needed to travel halfway across one of the world's largest countries.

Nevertheless, William made it to Kansas City to start his new life. William received electrical training before departing to America. His first job in the States was as an electrician for the Kansas City Streetcar Company, and later, La Pierre Electric. It was with La Pierre Electric that William worked on the Walnut Towers that still stand above the Plaza District area today.

How a Crash Gave Way to a Dream

As a nation of immigrants, America has always been known as the land where dreams come true. William was beginning his career when our nation's worst economic crisis happened. In September 1929, share prices on the New York Stock Exchange began collapsing, sending the economy into a tailspin.

The 1929 Stock Market Crash led to the Great Depression. This left an estimated 15 million Americans unemployed and businesses to close forever. Occurring almost simultaneously was the great Dust Bowl — a severe drought that destroyed acres of crops and killed approximately 7,000 people from the Midwest and into the Southern Great Plains.

La Pierre Electric was not spared by the Great Depression and had to file for bankruptcy. It was in 1930 that William Wachter cashed in a $500 life insurance policy and founded Wachter Electric.

William was an entrepreneur with an innovative mind that never let his dream die.

After the Great Depression, America was thrusted into its next monumental challenge: World War II. President Franklin Roosevelt’s famous words came after the Pearl Harbor military base in Hawaii was attacked by Japan’s air force. Life would once again change drastically for Americans.

By 1945, nearly 50 million men had filed for U.S. military service to fight fascism of the Axis powers in the war. Because so many men had left their businesses, jobs, and families for World War II, this left some opportunities and changes. Not only were millions of new jobs created, but millions of Americans moved to new communities across the nation.

It was roughly three years after the end of World War II that another ambitious young man started his career. Jack Botteron started working at Wachter as an electrical apprentice. Jack learned from the best during his apprenticeship.

But Jack also served in another role — as the high school sweetheart to William’s daughter Marjorie. Two years later Jack and Marjorie were happily married.

Together, William, Jack, and Marjorie ran a successful electrical contracting company that grew its reputation of providing expert electrical service at competitive pricing.

Over the next few decades Jack and Marjorie Botteron began to take over leadership of the company. William knew the company he built from very little had grown immensely. In 1980, William announced his retirement after Wachter Electric Co. had celebrated 50 years in business.

As William left, a new young and inspired man joined the family business, and Wachter Electric Co. was changed forever. Brad Botteron, the son of Jack and Marjorie Botteron, came into the fold to learn the trade. At first, he may have been unsure where his journey would take him and if he truly wanted to join the family business.

The family faced two new challenges in the late 1970s and into 80s: an increase in electrical competitors and the energy conservation movement. In a response to the Arab Oil Embargo, Congress created the Department of Energy in 1977.

In 1988 Wachter found another new way to expand its service offerings. That year the University of Missouri-Kansas City (UMKC) posted an RFP for a then-new technology called fiber optics. Though Wachter did not win the UMKC project, it opened the door for Wachter to connect with IT integrators and develop innovative solutions in new markets.

Brad Botteron, along with Greg Sloan, welcomed this change, which ushered in a new rallying cry: providing innovative nationwide technology integration services that solve business challenges — anywhere in the country.

Today Wachter, Inc. continues the dream of William Wachter in developing lasting customer relationships by exceeding their expectations. Wachter has a history of effectively handling changes from starting with very little, to major national and global economic dips, to shifts in company operations, to becoming the leading nationwide solutions integrator it is today.

Even during our 90th anniversary, Wachter is supporting businesses returning to work safely during the SARS-CoV-2 (COVID-19) pandemic with leading edge technologies.

Wachter now maintains a dedicated workforce of 1,400 technicians, electricians, engineers, project managers, and many more innovators. We've since expanded our footprint to 14 strategically located offices across the nation, ready to tackle the complex challenges facing both SMB to Fortune 500 companies.

Here’s to the next 90 years of innovation and success!

What is a Wachter LBU?