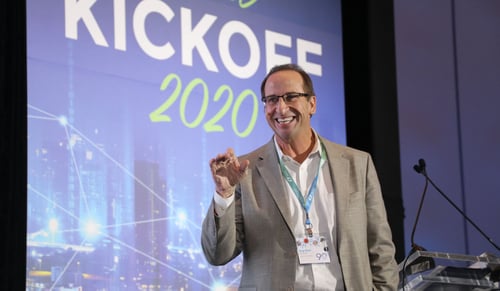 At Wachter, that person is Greg Sloan. For nearly 33 years Executive Vice President Greg Sloan has shaped Wachter’s culture through his teachings and his approach to leadership.

As we celebrate his retirement, we’re taking a look back at how Greg got started at Wachter, what he plans on doing in retirement, and the legacy he leaves behind.

For many at Wachter, the rise to the top starts in the field through an electrical apprenticeship or a helper position. Wachter promotes from within because we value hard work, dedication, and innovative thinking.

While Greg has always exemplified these characteristics, his tenure at Wachter did not begin in the field.

“I really wanted to become an electrician when I was a kid and had an opportunity that didn’t work out,” Greg said. “It wasn’t until later in life when I met Brad, that’s how I got started at Wachter.”

After a church service one Sunday, Greg told Brad Botteron, grandson of founder William Wachter, his lifelong dream of becoming an electrician. Unfortunately, Greg says he was “too old” to work as an electrician by that point.

Brad tells the story of that fateful conversation: “Greg said, ‘I’ll come work for you for free, so I can learn the business.’ And he did! He came to work at Wachter in the daytime, then after his work was done there, he went to his regular full-time job in the night.”

For six months Greg worked unpaid at Wachter before coming on full time.

“It was a difficult decision because I was leaving a pretty stable job,” Greg said. “I had been at Bendix for five years with good benefits. I had a family with three small children, so it was scary. But I think part of it is being brave to take those chances — and look what’s happened.”

Greg’s first experiences at Wachter were at the former location at the corner of 30th and Cherry Streets in Kansas City, Mo. 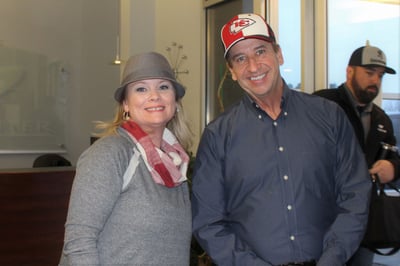 “Marjorie and Jack were trying to turn the business over to Brad, but there wasn’t much to turn over since Brad already had taken on a lot of responsibilities,” Greg said. “Financially, we were doing probably a million or less at that time. It was a struggle at first when we were living hand to mouth and keeping the wolf back down.”

Wachter had been an electrical company since its inception in 1930. That all changed when Brad learned of an RFP through the Digital Equipment Corporation for the University of Missouri-Kansas City (UMKC) for fiber optic networking.

Wachter didn't get the oportunity to bid that job — still, Brad and Greg saw the future of Wachter expanding with fiber optics installation. Greg built the foundation of crucial relationships with IT integrators Digital Equipment Corporation, IBM, and Getronics.

“So we trained our guys [for fiber optics], but then Digital wanted us to go outside of the Kansas City area,” Greg said. “Well with the Union regulations back then, you could take one person outside of that local 124 here in Kansas City. But if I wanted to go to Springfield, St. Louis, Wichita, or Des Moines, I could only take one person. And then it was retraining everybody that we hired out of that local chapter.”

Though it was a difficult decision, Wachter had the foresight to see that these new marketplaces opened up a bright future for Wachter, and canceled the Union agreements.

“But once that happened, it was like the floodgates opened,” Greg said. “We were able to hire anybody, train them, keep them, and we could work anywhere in the country. Year after year we grew at 40 percent for the next 10 to 15 years like that.

“So you can imagine how fast that was happening, how quick it was going, and it was quite an evolution for all of us.”

A New Outlook, A New Mindset

Prior to working at Wachter, Greg didn't have much experience with departments such as Human Resources or the Solutions Design team. But by putting trust in others and working out the kinks, Greg found a way to make it successful.

“I didn’t know much about all of those things,” Greg said. “But it was in trusting the directors who were in charge of those departments, having constant communication with them, and mentoring them on their abilities that we could succeed.”

What Greg is known most for in his tenure at Wachter are the Arbinger Institute cultural development that he teaches, such as Developing and Implementing an Outward Mindset. 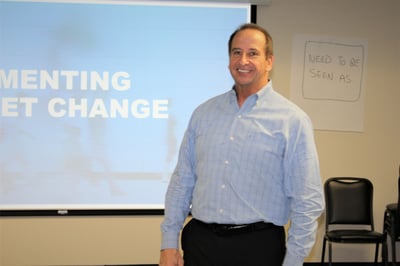 “I feel very passionate about these trainings, because to me we’ve seen it make a huge difference in how we treat each other, how we see each other, and how we move forward — even with the customers,” Greg said.

About 25 years ago at a Christmas party, Brad introduced Greg and partygoers to a pamphlet called “The Choice.” In this pamphlet were principles from the Arbinger Institute in bullet points. A big takeaway is the need for an outward mindset, which will help us "see others as people who matter like we do. We take into account their needs, challenges, and objectives. And we focus on collective results."

Both Brad and Greg knew there was something to these teachings. They encouraged each member of the executive leadership team to read a chapter and then discuss what they had read at the next executive meeting.

After reading the book, they asked Arbinger to facilitate training for the executive leaders who would then be certified and would train their employees. But it wasn’t always smooth sailing after implementing the Arbinger principles.

“There was a time probably between 2006 to 2008 where it was very difficult with the highest levels, with a lot of dysfunction, and an uncooperative environment,” Greg said. “I don’t ever want to see our company go back to those days — I’m confident that’s not going to happen.”

In times like those years, Greg says it’s imperative to recount the lessons from Arbinger and other books and courses that Wachter leadership has studied since, such as understanding how to conquer The Five Dysfunctions of a Team. In this classic leadership book by Patrick Lencioni, the five dysfunctions are:

Long before GPS was integrated into smartphones and vehicles, Wachter technicians had to draw lines on a travel map where they had to go to get to job sites across the country. One time a technician was having difficulty understanding how to get to Grinnell, Iowa.

“I tried to explain it to him and finally he couldn’t figure it out and I said to just go up I-35 and when you get to I-80 turn right,” an exasperated Greg said at the time. “I tell that story a lot to people in the Arbinger classes that I made that kind of mistake. That was probably not the best advice I could give because it was out of frustration and a lack of patience.”

“I think he’s a teacher by heart,” Williamson said. “The classes and courses he’s taught are invaluable. It’s very intense in our business, and it’s important to recognize the humanity in everyone and not treat people like objects. I think he’s done a great job of teaching that.”

Brad agrees that the teaching of these core values has positively impacted Wachter as a whole over the last few decades.

“We’re more unified, we’re more capable of speaking the same language because we all understand what it means to have an outward mindset,” Brad said. “It means to be focused on others rather than ourselves.”

The beauty of these courses is how universal the lessons are to everyone he’s taught. Marty Roselli, Vice President of Wachter Technology Solutions (WTS), says the most important part of the Arbinger training is that Greg makes it personal.

"So when he walks in, he knows the content, he knows how to convey it," says Marty. "But more importantly, he brings it down to a personal level."

And the influence didn't end within the four walls of a Wachter buildilng. "The impact that Arbinger and Greg Sloan made in some of our employees' lives — not just what was going on in the business between groups, but on the homefront — was unbelievable," said Sean Finnegan, Vice President of Sales and Marketing.

Even though Greg is retiring, he’s not going anywhere. Greg plans to continue teaching Wachter employees.

Having a thirst for knowledge is part of who Greg Sloan is, and that will continue in retirement. As he gets more time to spend with family and friends, fish on the lake, and catch a Royals game, his passion for learning will never quit.

His next bucket list item: learning a new language. Greg is interested in learning either Italian or Spanish — or perhaps both.

“I would love to learn another language. I know it won’t be easy, but I’m always on this learning path,” Greg said. “If I get excited about something, it gets my full attention. I’ll get OCD about it.”

For up-and-coming employees of Wachter, Greg’s advice is “don’t ever limit yourself. Never be complacent with where you’re at, and always want to improve both your skillset and your own personal being.”

For leaders of Wachter, Greg’s advice to them is to remain humble. “It takes a whole company to do all of the work and recognize those people for what they do.”

Wachter will miss having Greg in the office throughout the year. His curiosity, humility, and outward mindset is appreciated by many. We wish Greg nothing but the best for himself and his family in his retirement.

Wachter Donation Helps Provide Beds for Children Without A Bed

Wachter 2017 Axis Partner of the Year